The performance of the crypto market has reached a new high since June. The main reasons are the persistence of high inflation expectations in many countries, the strengthening of “stagflation” risks, and the SEC’s notice of no objection to Bitcoin futures ETFs.

Bitcoin futures ETFs have been notified by the SEC of no objection, which means that the world’s largest capital market is officially open to cryptos, and the biggest regulatory risks have been eliminated in the short term, clearing the way for mainstream institutions to enter the market.

Under the influence of the temporary increase of the US debt ceiling, the high market risk appetite, and the endorsement of institutions entering the market, US debt and US dollar both fell. Although many central banks have released the news of bringing forward interest rate hikes, the high inflation pressure shows that the overall liquidity of the market is expected to remain at a high level for a long time.

The Bull Market Is Still Continuing

After a short trough, the crypto market entered an explosive phase this week. In terms of market value, as of 4:00 UTC on Oct. 15, the market value of the whole market has risen to $2.45T and is about to approach an all-time high ($2.54T). From the perspective of volatility, the market volatility difference continued to expand this week, while the implied volatility was higher than the realized volatility, indicating that the market is stable in the bull market stage, and there is no sign of decline. 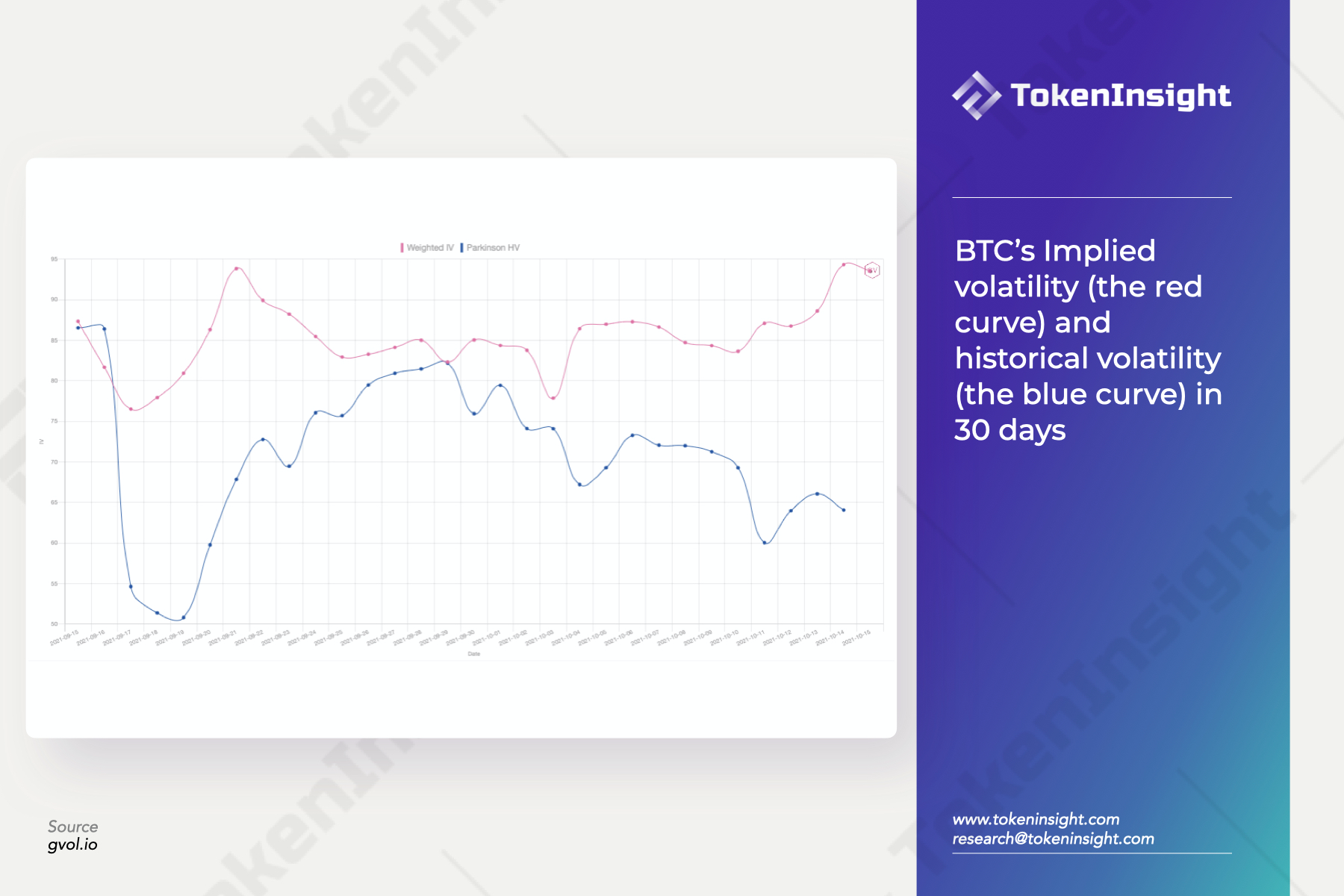 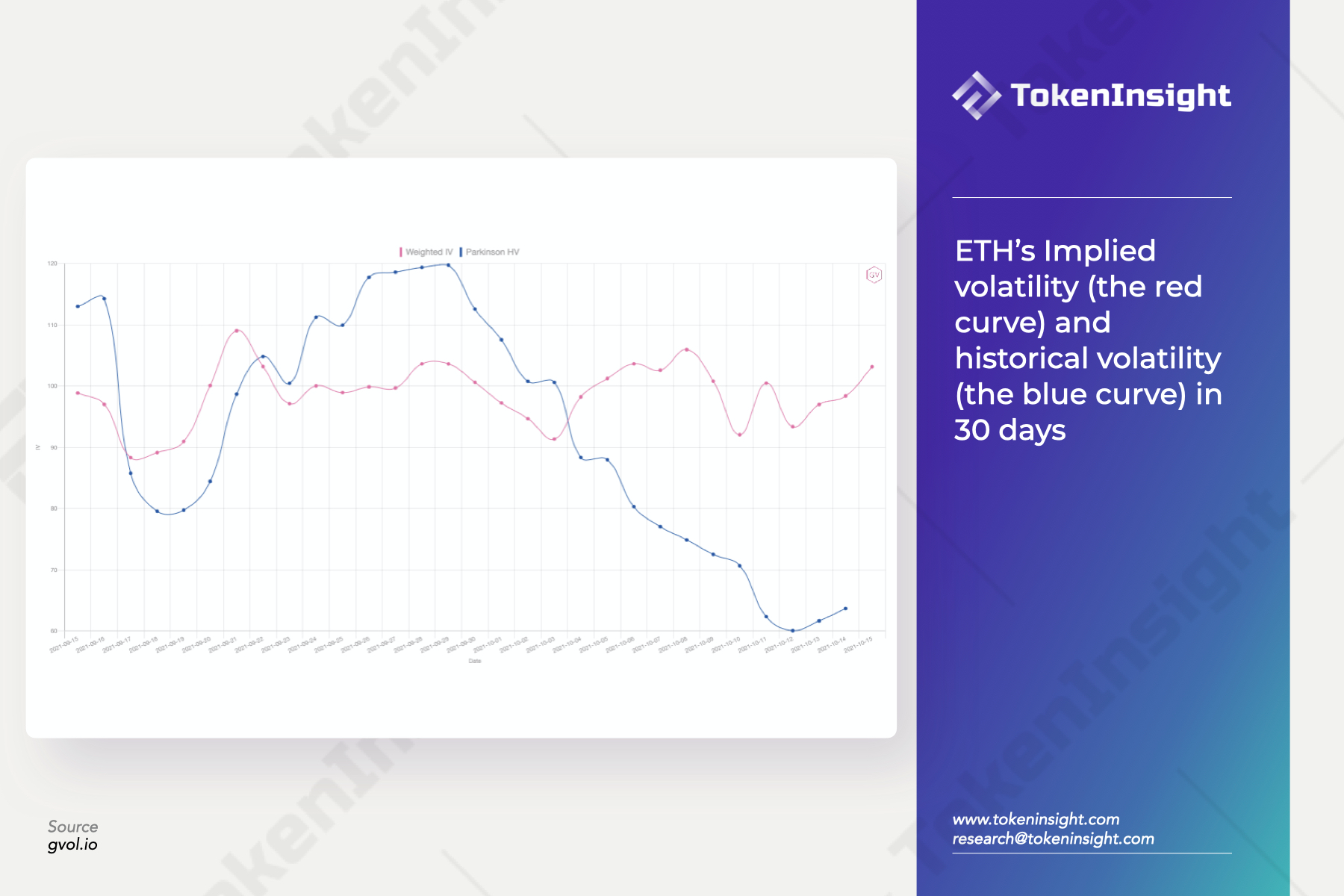 From the perspective of skewness, market expectations have risen in the short term, but the medium and long-term expectations have not changed much compared with last week. An important reason is that a large number of professional investors have turned to bulls since the beginning of August. 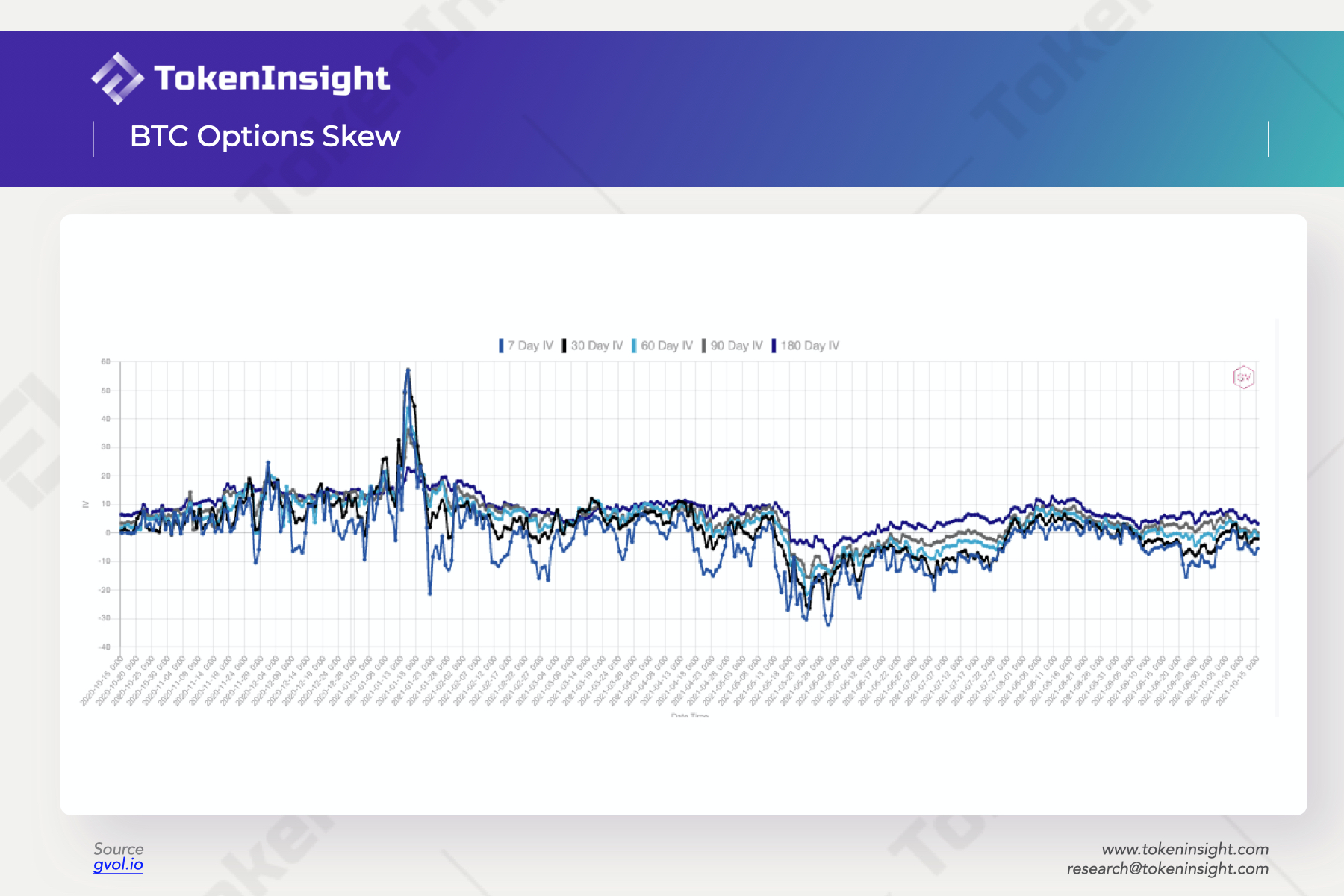 From the perspective of the futures term structure, on the one hand, the bullish sentiment in the derivatives market is obvious, and the overall premium of futures has risen to a new high since May. On the other hand, the premium of forwarding futures term structure on major futures exchanges has obviously declined, indicating that although investors are optimistic, they are not going to pay more premium for the future due to worries about the risk of monetary policy tightening and macro liquidity contraction. 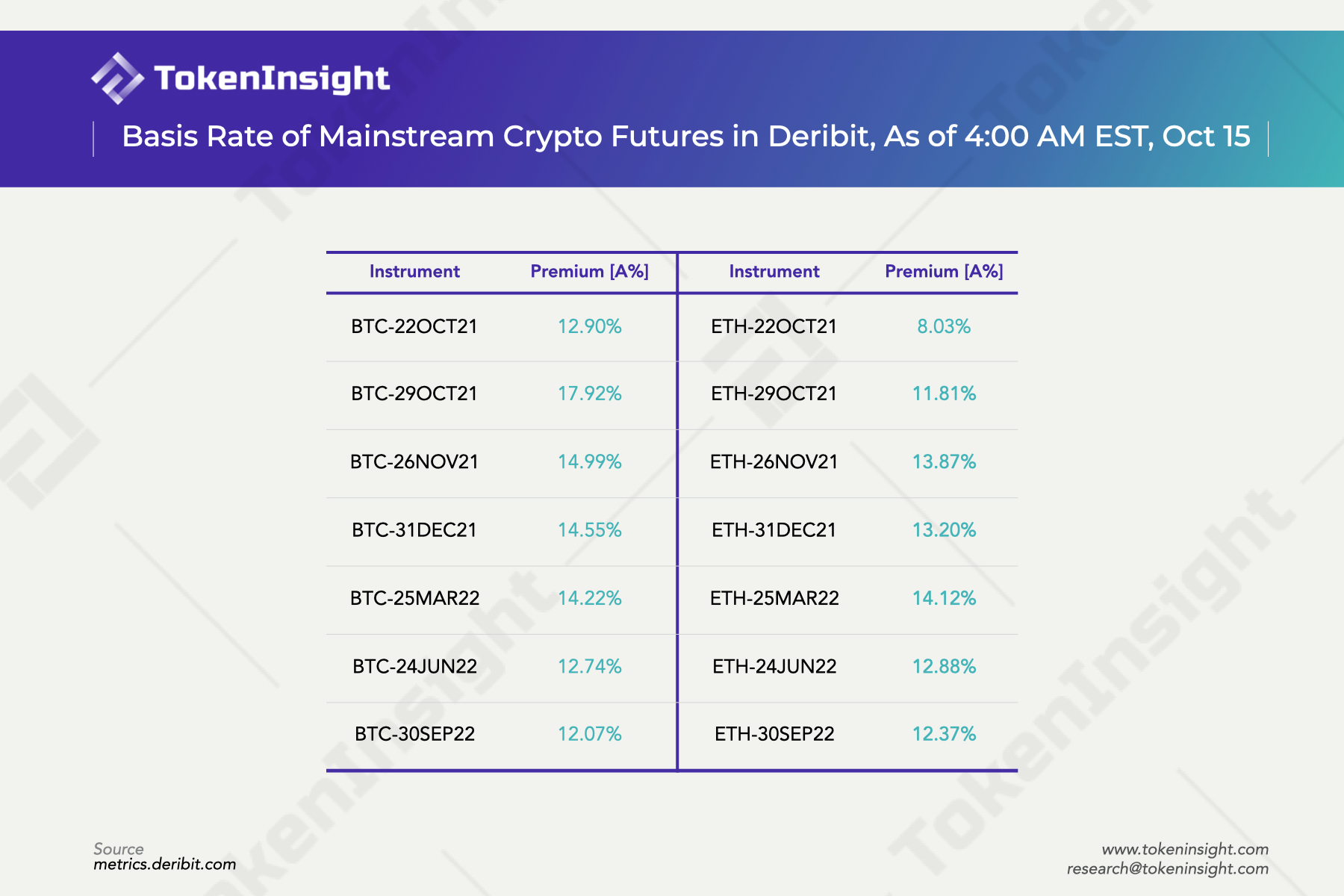 Anti-Inflationary Demand: the Source of the Bull Market

The outstanding performance of the crypto market this week is inseparable from changes in the macro-environment.

On Oct. 13, the September CPI in the United States was announced, in which the inflation rate was reported to be 5.4%, higher than market expectations, and much higher than the 2% target set by the Federal Reserve. In contrast, the non-agricultural index, which reflects the economic growth situation, hit a new low. Considering that high inflation of more than 5% has lasted for half a year, investors have insufficient confidence in the Fed to reduce inflation. Economic growth is still lower than expected, indicating that the stimulus to the economy by releasing liquidity has not had enough effect. Affected by this, institutional investors are turning to stocks, commodities, and cryptos to hedge inflation risks. 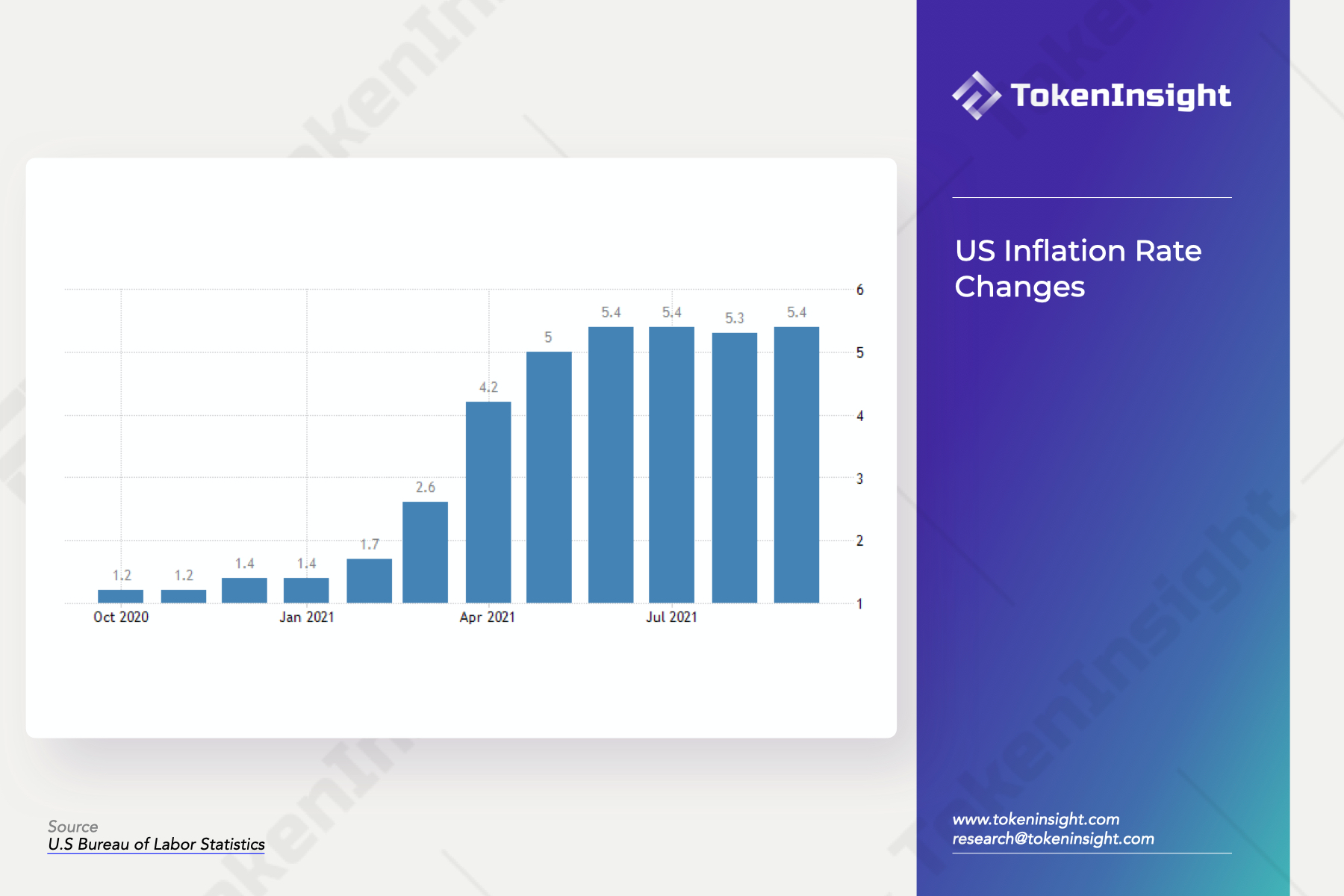 In addition, a number of macro indicators show that the risk of “stagflation” is increasing. Under the pressure of flooded liquidity, developed country economies such as South Korea and New Zealand have responded by raising interest rates, while the UK has also indicated that it may raise interest rates earlier than December. The divergence between the US Institute for Supply Management’s (ISM) manufacturing production index and the price index, and the US 10-year Treasury yield exceeded 1.61% on October 11 despite the increase in real yields, may confirm the threat of stagflation. OPEC’s slow and steady production growth may pose a serious inflation threat and have a counterproductive impact on oil demand.

The Federal Reserve is facing concerns about inflation risks and stagnant economic growth, but the Fed’s tough attitude on interest rates and expectations of earlier debt reduction (at a time when prices are soaring and output is stagnant) point to stagflation. Under such circumstances, the demand for inflation-resistant assets such as Bitcoin has further increased.

At the same time, the SEC’s approval of Bitcoin futures ETFs and the liberalization of crypto transactions in Russia, India, and other countries indicate that crypto investment is officially accepted by major capital markets under the background of gradual improvement of compliance. On this basis, some highly regulated institutional investors (such as pension funds) have also begun to consider participating in crypto-related transactions.

It can be predicted that due to the persistence of a high inflation environment, with institutions from major capital markets extensively participating in crypto market-related businesses, the possibility that the good performance of the crypto market will continue to increase significantly until the end of the year. However, although the liquidity risk will not significantly affect the market in the short term, in the medium and long term, due to the general toughness of central banks in monetary policies, the risk of liquidity contraction is still one of the important threats to the future performance of the crypto market.